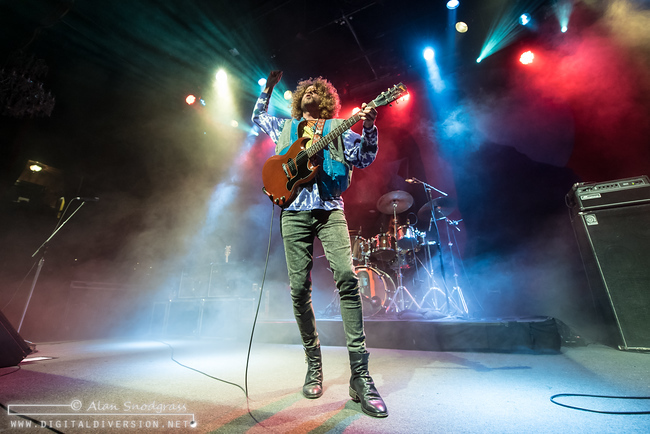 Rock and roll is alive and well! Any doubts? Feel free to hit up any one of the people that attended Wolfmother’s epic sold out show last night at the Fillmore. Ten years after the release of their classic self-titled debut, Wolfmother is back with a new album (Victorious

) as the perfect excuse to pummel San Francisco after a long, two year absence.

The music kicked off at 8 pm as folks dribbled in the front door, clearly not already hip to the tour openers, Deap Vally. The two women on stage were riveting … more so by the shocking cacophony that blasted the room from just a guitar and drum kit than the fringed dayglow body suits that they wore. If ever there was a band to pound beer to, this was it, and by the time they wrapped their 40 minutes, the crowd was sufficiently liquored and primed for some Wolfmother.

With that aforementioned album freshly in the hopper, Andrew was clearly chomping a the bit to show the San Francisco crowd what was up as Wolfmother launched into Victorious followed by New Moon Rising off of Cosmic Egg. That one-two punch sucked the crowd right in and Woman pushed them over the brink, the floor of the ballroom noticeably flexing as the crowd bounced along.

The crowd had been clearly won over … so rapt in the music that there was not a single cell phone in the air. The new music meshed seamlessly with the old and neither the band nor the room let up one iota throughout the set. Stockdale perfectly nailed vocals as Ian and Alex held down the bottom end, leaving plenty of room for Andrew is dish out liberal doses of his guitar licks. Between that and Peres capering around the stage, there was plenty for the crowd to enjoy. By the time Dimension rolled around, there was a bona fide mosh pit and, even more surprisingly, a few crowd surfers. An Stockdale solo tune, Keep Moving, even found its way onto the setlist to the room’s obvious pleasure.

The generous one hour and fifty minute set wrapped with a pair of tunes from the band’s debut album, each of which each featured a special guest. In the case of Vagabond, an audience member was served a cold one by the crew. For Joker & the Thief, a young girl (Andrew’s daughter?) in a monster costume wowed the crowd with her dance moves. Wolfmother keeping rock real.