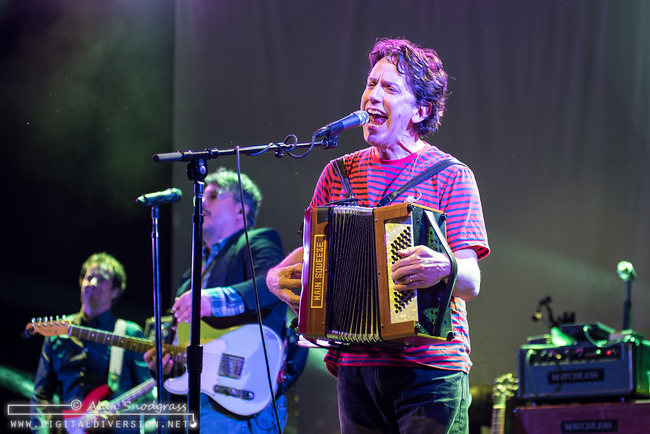 Bay Area fans of They Might Be Giants were no doubt disappointed when the band’s March show at Berkeley’s soon-to-be-opened UC Theater was abruptly canceled at the last minute. So how does a quality act make it up to their fans?  TMBG not just rescheduled the canceled gig, they mapped out TWO Bay Area shows which both quickly sold out. But wait, there’s more! Thursday night’s show at San Francisco’s Fillmore found They Might Be Giants featuring one of their “one-time-only-in-this-here-town” shows spotlighting their classic 1992 album, Apollo 18

, in its entirety for the first (and last, according to guitarist/vocalist John Flansburgh) time in San Francisco.

Save for the die-hards that lined up early for that coveted spot against the stage, the stream of fans through the front doors of the Fillmore was slow and steady but ultimately packed the floor by the time TMBG’s 9 pm set time came and went. As the crew scurried about the stage tuning instruments, changing batteries and taping down wires, the crowd stood patiently by imbibing in a few cocktails or other mind-bending pleasures such as Northern California’s finest, which wafted through the air. The truly eclectic crowd spanned the ages but mostly seemed to adhere to the 14+ age limit of the event. Soccer moms, stoners, teenagers, hipsters, punks, bears and more … all primed for what would be well-over two hours of music sprinkled liberally with comedic banter.

TMBG kicked the evening off with an hour of the hits. With this crowd, they could clearly do no wrong … each introduction of a song (including selections from their March release, Phone Power

) was met with a cheer and every joke was met with an ample laugh. One look around the room and all you could see were smiling faces and nary a cell phone in the air. That, folks, is how it should be done.

With a 20 minute intermission where the audience was encouraged to “shuffle the deck”, They Might Be Giants returned to the stage for the much-anticipated run-through of Apollo 18

. Veering sharply from the predictability of the recent trend of band’s playing a classic album front to back, the band took the unexpected approach of playing the album in reverse order. This meant kicking things off with a mind-bending and flawlessly executed rendition of “Fingertips” after which the tension on the stage seemed to ease a bit as the band for the most part sailed through the rest of the album.

Two and a half hours in at most sold-out Fillmore shows you’ll find a good number of people lurking by the stairs just waiting for the show to end in order to grab the coveted show poster. Not so this Thursday night where the floor stayed packed through the end of the last encore. Truly an amazing night of entertainment.