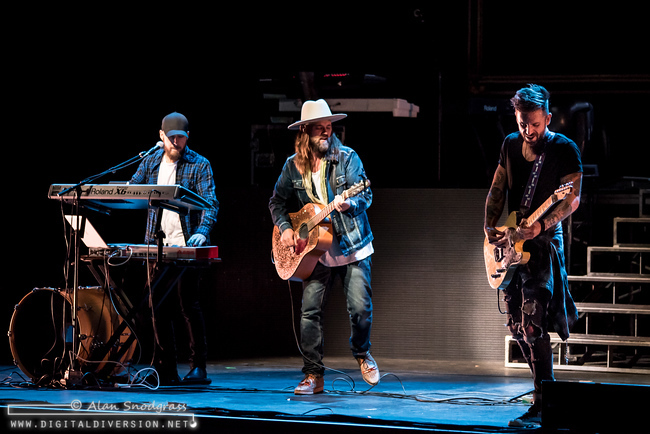 Haven’t heard of The Federal Empire yet? Well now you have and, in all likelihood, you’ll be hearing a lot more. The Los Angeles based trio was founded by Chad Wolf of Carolina Liar fame who is joined by McKay Stevens on synths and Keith Varon on guitar. Stripped down with only two bass drums for percussion, these three guys merge Americana songwriting with a modern composition with the result being a sound that is undeniably unique but at the same time familiar.

Currently on the road with Lindsey Stirling … one might say an odd pairing … The Federal Empire hit Oakland’s Fox Theater last night for 30 minutes of foot-stomping singalongs that had the folks prescient enough to arrive early enjoying their undeniable catchiness.  Despite their stripped down appearance, the band commanded the large stage as they deftly pulled out songs like The American Dream and Never Saw It Coming which are undoubtedly sure to take notice when TFE drop their debut EP this Fall.

Anyone that caught their set last night is mostly likely look forward to the day when they can catch the band unencumbered by a seated show. It’s sure to be a raucous good time!