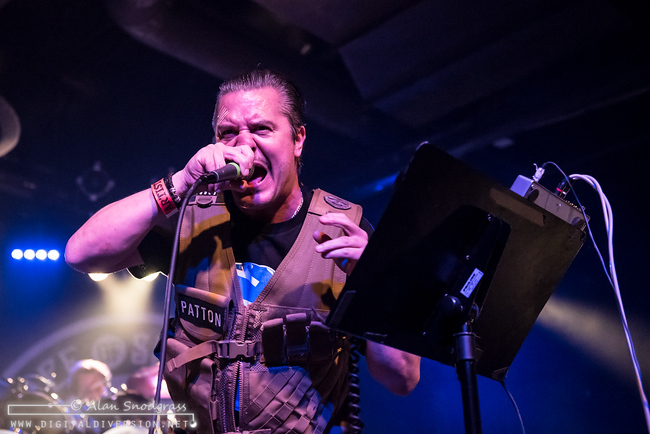 Dead Cross is a band thats simple existence defies logic. Who could have imagined Mike Patton (Faith No More) joining up with Dave Lombardo (Suicidal Tendencies), Michael Crain (Retox) and Justin Pearson (Retox, The Locust) to form a stripped down hardcore band. Yet, not only did they drop a self-titled LP, they hit the road for a tour a broad swath of the United States including a stop at Sacramento’s Ace of Spades.

The evening kicked off with a 50 minute set by Secret Chiefs 3 … five druids wearing black hooded jackets and jamming out intricate instrumentals that covered a dizzying span of musical styles from surf to death metal. An odd concoction for sure, but the Trey Spruance-led group quickly sank into their groove and the room, a good portion of which initially responded with “what the fuck?”, quickly warmed. In fact, when Secret Chiefs wrapped their set and walked off the stage, they were thanked with resounding applause from the front to the back of the house.

With the Secret Chiefs’ equipment cleared, it was time for Dead Cross. The band strolled onto stage in the dark and Patton assumed a crouched position in front of Lombardo’s drum riser, grinning at bassist Justin Pearson as he bounced back and forth on the balls of his feet, clearly eager for the set to begin. With a rapid-fire count-in it was on and the band tore into the first song off of their album, Seizure and Desist, as Patton hopped to the blasting strobes and Lombardo’s pummeling double bass. Talk about a kick in the face!

The crowd, which had previously been lulled into submission by the Secret Chiefs, immediately came to life and Patton was clearly pleased with the reaction as the band tore through the first four songs of their album in sequence. Pausing briefly to address the crowd, Patton informed the room, “we are here to fuck you … so you better bend over and take it!” As if that was not already abundantly clear to the frothy crowd.

For a band with only one album worth of released material, Dead Cross didn’t seem to be interested in wasting any time and dragging out the set with a lot of filler. Sure, Patton couldn’t resist occasionally stirring up shit with the crowd but otherwise the relatively brief 50-ish minute set stuck to the album with a few new tunes (listed as “New #2″ and My Perfect Prisoner” on the setlist) and a “Nazi Punks Fuck Off” cover thrown in for good measure as the encore.

Do you remember the first time you got laid? I don’t either but I think it was good.  – Mike Patton

Let’s hope this won’t be the last time we see Dead Cross. With the number of other projects that the members of the band are involved in, it’s hard to imagine this all coming together very often so take advantage of the opportunity to see these guys live while you can. The tour ends September 23 in Denver, Colorado.