Cock Sparrer, Subhumans, Street Dogs, Monster Squad, The Drowns and Territories perform October 19, 2019 as part of Rock The Ship on the USS Hornet in Alameda, California 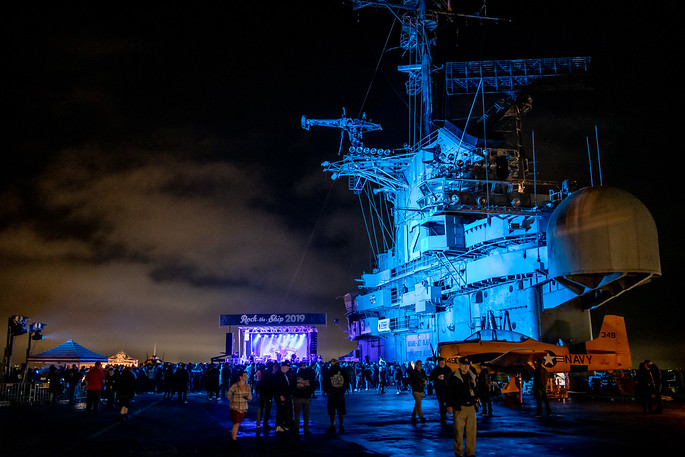 If you purchased a record in the last decade or so, there’s a very good chance that the good folks at Pirates Press were behind it. Not only do they employ literally a whole town in Czechoslovakia pumping out said records, they run their own label which puts out tunes by a ship load of rad bands. So when it comes time to celebrate 15 years, the Pirates pulled out all the stops.

Anchored* by a Saturday festival on the flight deck of the USS Hornet, the weekend’s festivities spanned four nights and which set sail Thursday night at Oakland’s Starline Social Club with a stacked line-up of Lenny Lashley’s Gang of One, The Bar Stool Preachers, Bad Cop/Bad Cop and CJ Ramone tearing through a set of Ramones classics and solo tunes from his latest release, “The Holy Spell” (click for pics).

Things got a bit more complicated on Friday night, requiring attendees to pick a tack … either setting sail across the bay for another dose of Bad Cop/Bad Cop and The Bar Stool Preachers with The Re-Volts and The Last Gang (link to pics) or steering back to the Starline for The New Darkbuster, Harrington Saints, Grade 2 and The Complicators. By all accounts, there was not a wrong decision to be made.

Saturday kicked off with all hands on deck for a festival on the flight deck of the USS Hornet where the weather cooperated and the views of the San Francisco skyline as the sun set were as epic as the band performances. With Territories kicking things off, the good times did not let up as The Drowns, Monster Squad, Street Dogs, Subhumans and the mighty Cock Sparrer all brought their best.

While the ship show wrapped up around 8 pm, the day was far from over. Back on the mainland, landlubbers were already heading back to the Starline Social Club for another dose of The Bar Stool Preachers and Territories, this time along with 45 Adapters. The hot ticket, however, seemed to be down the street at the Elbo Room where Uke-Hunt, toyGuitar and Swingin’ Utters packed people into every corner of the tiny room (more pics).

For those with the stamina (not me), Sunday brought one last Starline show to close out the weekend festivities with Charger and the Old Firm Casuals (both bands featuring members of Rancid who had played Madison Square Garden with the Misfits on the night before).

A hearty congrats to the good folks at Pirates Press for not only celebrating 15 years, but doing it up in epic proportions. This was no doubt the party of the year for the Bay Area punk rock community … and beyond.