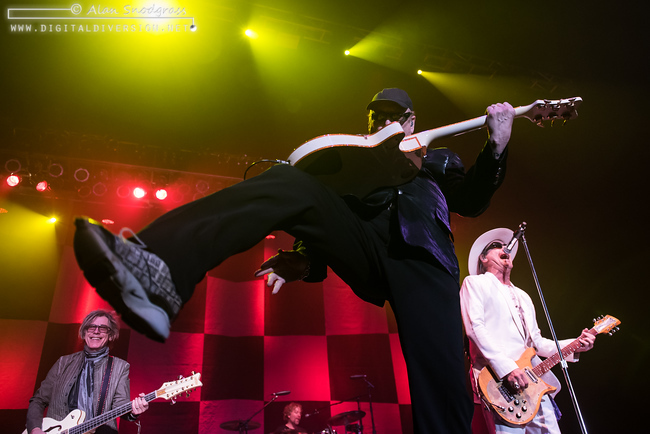 The legendary Cheap Trick closed out their latest tour with a Sunday night show at San Jose’s City National Civic. With no opener and no messing around, Cheap Trick blasted through their hour and 40 minute set like true rock and roll veterans.

The San Jose crowd was on their feet and clearly pumped as the band greeted them with their standard set opener, Hello There followed by Come On, Come On. That one-two punch of classics set the tone for what would prove to be an astounding night of classics and rarities. As a special treat for the San Jose crowd, Cheap Trick, clearly beaming from their recent Rock & Roll Hall of Fame induction, busted out No Direction Home from their upcoming 2016 release “Bang Zoom Crazy… Hello.” And if you missed the news, that same tune is now available as a free download here.

True to form, Rick Nielsen egged on the crowd from the edge of the stage as he showered the audience with handfuls of guitar picks, pulling out a different classic Nielsen guitar with each song. Robin Zander’s vocals were top-notch as Daxx Nielsen and Tom Petersson held down the bottom end, the latter doing the seemingly impossible on a 12 string bass.

The encore could not have finished the night more perfectly. Surrender, a raucous rendition of Gonna Raise Hell and finally Goodnight, for which Rick busted out his checkered five neck Hamer guitar (and yes, he did actually play on all five of them) brought it all home and still left the crowd with plenty of time to get home and put the kids to bed.