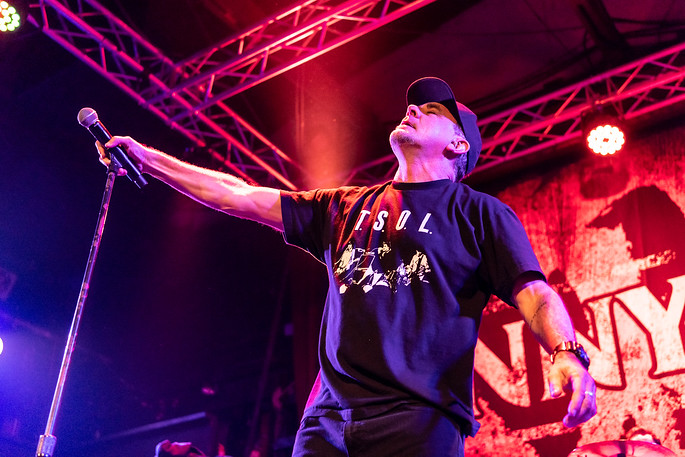 January appears to be the season for West Coast mini tours with 2020 finding SoCal punks Pennywise laying waste to venues along with OC OG’s the Adolescents and Guttermouth. This past Thursday found the juggernaut at Santa Cruz’s Catalyst Club with openers Shiners Club.

With a four band bill, the crowd showed up early and Shiners Club’s 30 minute scorcher of a set appropriately warmed up the crowd (along with help from more than a couple of cocktails) before Guttermouth picked things up with their special brand of chaotic zaniness.

By the time Adolescents took the stage at 9:20, the Cat was packed and ready for some action. Their scorcher of a set started with No Way and didn’t let up to the last notes of the epic opus Kids of the Black Hole. 40 years as a band with multiple line-ups and these guys are as ferocious as ever.

While a tough act to follow, Pennywise was certainly up to the task. And with the show starting to run late, the crowd was more than ready to keep the party going … opening up the pit from the first notes of “Every Single Day.”

Celebrating 20 years since the release of “Straight Ahead,” the band pulled heavily from that album (including favorites Alien, Can’t Believe It, My Own Country) without sacrificing other fan favorites. And never one to stick to the setlist, Pennywise pulled out a few surprises for the Santa Cruz crowd including inviting Good Riddance’s Chuck Platt and Russ Rankin on stage for a cover of Minor Threat’s Minor Threat. If that wasn’t enough, the band pulled off an unrehearsed yet respectable rendition of Final Chapter in response to a request from the crowd.

I never quite understood the appeal of Stand By Me (which has become a regular on the setlist) to Pennywise, but it did prove to get the crowd singing along in advance of their set closer, Bro Hymn. Unfortunately the high height of the Catalyst stage kept the usual swarm of fans but they were more than happy to participate from the floor. All-in-all a solid Pennwise show and a good time.