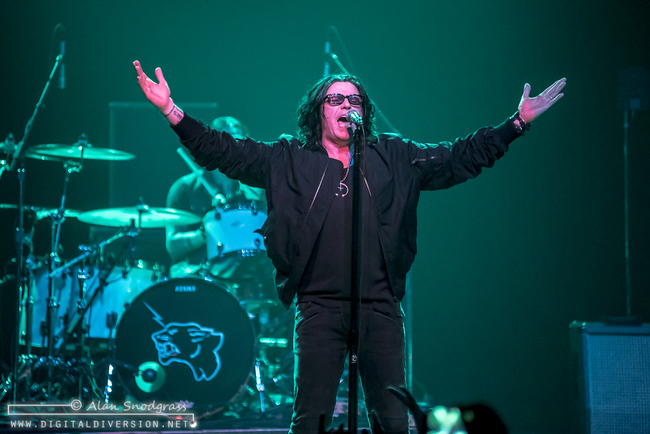 The Cult are currently out on their aptly-named “PRIMALCULT” tour with Primal Scream. Tuesday night found the bands at San Francisco’s historic Warfield where, less than an hour before showtime, the sidewalk out front of the venue was surprisingly quiet as the show’s concert goers gradually filed in. In inactivity out front was thankfully not a representation of what was going down inside and by the time the Cult took the stage for their 9:30 pm set time, the floor was packed and the crowd was sufficiently inebriated.

The Cult kicked off their set with Horse Nation off of their debut album, instantly whipping up the crowd into a froth as frontman Ian Astbury hammered away furiously on his tambourine. From there, a pair of songs from Love (Rain, Nirvana) set the perfect stage for Lucifer off of 2012’s Choice of Weapon. With their tenth studio album (Hidden City) set for release in February, the band would have been remiss if they hadn’t provided a taste of the new material. As such, Dark Energy proved a perfect insertion into the setlist and, by its end, had Ian dramatically shaking off what he went on to describe as a “ball buster” of a song.

Indeed, Astbury was in top form … showing no sign of running out of steam as he blasted through the 90 minute set with Billy Duffy artfully weaving in the guitars. All this seemed to have Ian in quite the good mood and particularly chatty between songs … stirring things up with the crowd on topics from terrorism to activism and gentrification (which generated reactions ranging from cheers to middle fingers). No worries, Ian was clearly up for a good time whether the crowd liked it or not.

The fact is, there wasn’t a whole lot not to like. With the band sounding better than they’ve sounded in recent years, together with a stellar setlist that saw the return of Fire Woman, the occasional rant was a small sacrifice. With only three PRIMALCULT dates left, we can only hope for a return once Hidden City drops.