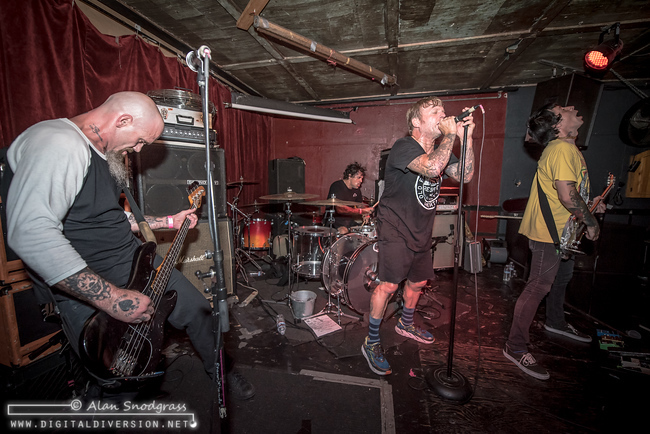 Any fan of hardcore music who is not aware of Bloodclot is truly missing out on something important. A super group featuring four musicians who have played (or are playing) in so many different bands that you have to wonder how they can collectively align schedules to record, much less tour. The fact that Bloodclot even exists is astounding. The simple answer, to have fun and crush it in front of unsuspecting crowds. Check out this line-up: John Joseph (Cro-Mags) on vocals, Todd Youth (Warzone, Murphy’s Law, ex-Danzig) on guitar, Nick Oliveri (Dwarves, B’last!, ex-QOTSA, etc.) on bass and the might Joey Castillo (B’last!, ex-QOTSA, ex-Danzig, Zakk Sabbath and plenty more) on drums. Holy shit, right?!?!

Bloodclot is just wrapping up a co-headlining tour with Negative Approach which included a stop at San Francisco’s Thee Parkside. The cramped room filled up quickly for Bloodclot and, given the number of Cro-Mags shirts in the room, the word on these guys is clearly getting out. The band pummeled Thee Parkside during their brief 30 minute set which had a surprisingly youthful Joseph making full use of the tiny stage as fans held tight to the barricade as the pit seethed behind them. By the end of the set, moisture was literally dripping from the ceiling. Yes, you should be bummed that you missed it … don’t let that happen again.